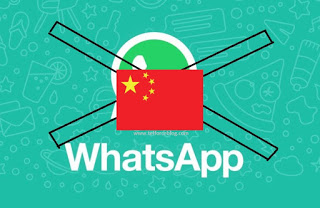 Hard times for enthusiastic WhatsApp users in the most
populous country in the world. The Chinese government has finally blocked the widely
used messaging app locally, following several days of restriction in its features
on a local scale.

As you might expect, the reason for this act is nothing
other than censorship and easier data monitoring.
The Chinese government is well known for this act. The
moment it discovered that a Western app or service is becoming very popular,
the government will block it in favor of a similar local alternative that is
much more supportive to the authorities and will willingly divulge users’
personal data to the government.

Recently, Tencent’s WeChat, one of the leading messaging
services in China, was discovered that it will be openly complying to any
requests from the authorities in letting out users’ names, phone numbers, and
even location to them, on condition that that users have choose to input their identities
into the app.
Of course, the blocking of WhatsApp led to multiple uproars from
local users:

A Chinese user complained bitterly on Weibo, said “Losing contact with my clients, forced back
to the age of telephone and email for work now.”

Another one said; “I’m
going to be out of business soon.”

Certain WhatsApp functionalities were initially blocked inChina, such as video and audio calls, but now, the whole WhatsApp service is been
finally blocked in the country.
WhatsApp was the last main Facebook-owned product to be
available in China, and its recent block is definitely negatively affecting Mark
Zuckerberg’s plans of expanding the presence of Facebook-related products
locally.
Source
Chinafacebook
Share

iPhone X battery is a bit bigger than iPhone 8 Plus

Apple still the most valuable brand globally for the fifth time

Apple still the most valuable brand globally for the fifth…