Due to the pandemic, many people went for a new tablet in order to survive the lockdown while still having entertainment, study or work with the maximum comfort. Thus, making manufacturers having a rethink of reviving their tablet department. In fact, several companies released flagship tablets in the Android market. Even Xiaomi is back to the tablet market: the Chinese giant released the Mi Pad 5 and the Mi Pad 5 Pro with flagship-class specifications. Just yesterday, Honor launched the Tab V7 Pro, another flagship tablet with specifications for power users. 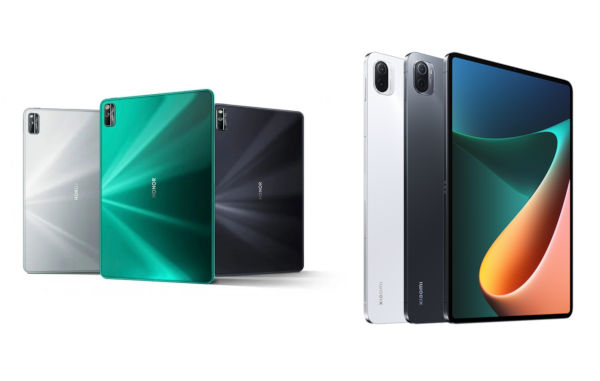 Both Honor Tab V7 Pro and Xiaomi Mi Pad 5 Pro brought cool design to the market. They come with an aluminum body and a  very high screen to body ratio thanks to narrow bezels around the display.

They both can be used as laptops thanks to the support of a keyboard and advanced multi-tasking features such as split-screen, multi-window, and more. They also support a stylus, as well as a nano-SIM which brings 5G support.

Just like the Tab V7 Pro, there is also a variant of the Xiaomi Mi Pad 5 with Wi-Fi only.

The most advanced display belongs to the Xiaomi Mi Pad 5 Pro. The tablet is equipped with an IPS panel showing up to one billion colors. It has a Quad HD+ resolution of 1600 x 2560 pixels, a refresh rate of 120 Hz, the HDR10 certification, and Dolby Vision. The Honor Tab V7 Pro has a Quad HD+ resolution as well, a 120 Hz refresh rate, and a great contrast, but it comes with 16M colors only. Note that Xiaomi Mi Pad 5 Pro has a slightly wider display with a diagonal of 11.5 inches.

The Honor Tab V7 Pro is the first tablet powered by the MediaTek Kompanio 1300T mobile platform, paired with up to 8 GB of RAM and up to 256 GB of native storage. Xiaomi Mi Pad 5 Pro has the same memory configuration in the most advanced variant, but it is powered by a stronger Snapdragon 870 chipset.

The Xiaomi Mi Pad 5 Pro is expected to offer higher performance considering the fact that Kompanio 1300T is less powerful than Dimensity 1200 and Dimensity 1200 is inferior to the Snapdragon 870 as well. The tablets run Android 11 out of the box, customized by MIUI and Magic UI, respectively.

The most advanced variant of the Xiaomi Mi Pad 5 Pro sports a dual camera setup with a 50 MP main sensor and an ultrawide 5 MP camera. But if you choose lower-end variants of the tablet, you get a 13 + 5 MP dual camera.

There is a big difference between these versions because the 50 MP camera is way better than a 13 MP one. In each configuration, Honor Tab V7 Pro has a dual camera including a 13 MP main sensor and a 2 MP macro camera.

The Xiaomi Mi Pad 5 Pro comes with a battery coming with a capacity of 8600 mAh and it supports 67W fast charging: the fastest charging technology in the Android market. The Honor Tab V7 Pro is equipped with a 7250 mAh battery that supports 22.5W fast charging.

The Xiaomi Mi Pad 5 Pro should provide a longer battery life due to its bigger battery.

Which tablet is the best at the end of the day? Based on my honest opinion, the Xiaomi Mi Pad 5 Pro is superior. It features a great display showing up to one billion colors, a faster charging technology, a better chipset, and even a much better camera if you choose the most expensive configuration. The Honor Tab V7 Pro is still a great choice, especially because it has a very high value for money.