Recently, Xiaomi unleashed its first foldable phone to the market under the Mi Mix series. This about the newly launched Xiaomi Mi Mix Fold. The new phone with flexible display adopts the same form factor as the Samsung Galaxy Z Fold2, hence offers room for us to pair them against each other. So, we have decided to publish a comparison review between these two foldable phones. 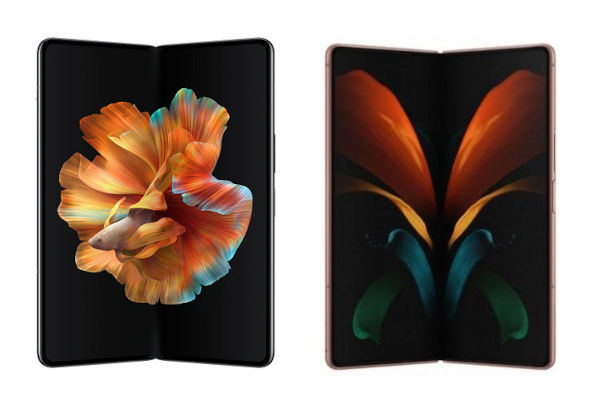 Is Xiaomi’s Mi Mix Fold now the king of foldable phones or is the Galaxy Z Fold2 still the best choice? Lets find out now.

As mentioned in the intro, the Xiaomi Mi Mix Fold and the Samsung Galaxy Z Fold2 share the same form factor: unlike the recent Huawei Mate X2, they come with a foldable display placed internally and a secondary traditional and non-foldable display placed externally, in case you want to use them as normal phones.

Lovers of compact phones might prefer the design of the Samsung Galaxy Z Fold2 due to its more elegant camera module. Further, it has a more compact and thinner body. It is even a lighter phone. On the other hand, the Xiaomi Mi Mix Fold offers bigger displays: both the foldable screen and the external display have wider diagonals. Further, the Xiaomi Mi Mix Fold comes in an additional ceramic version built with better materials.

Talking about the displays, these devices come with similar specifications and both feature excellent AMOLED panels. Despite it is a Xiaomi phone, the display of the Mi Mix Fold is made by Samsung.

In both cases, you get foldable AMOLED panels with 2K resolutions, HDR10+ certification. But on the paper, Samsung Galaxy Z Fold2 is superior thanks to its 120 Hz refresh rate, while Xiaomi Mi Mix Fold has a standard 60 Hz refresh rate.

If we talk about the external non-foldable displays, then Mi Mix Fold wins: it has a 6.52-inch external panel which, unlike the Samsung Galaxy Z Fold2, features a 90 Hz refresh rate, Dolby Vision, and the HDR10+ certification.

Xiaomi Mi Mix Fold is the most powerful foldable phone ever made: it is powered by the Snapdragon 888 mobile platform paired with up to 16 GB of RAM and up to 512 GB of native storage (UFS 3.1).

The Samsung Galaxy Z Fold2 comes with the weaker (but still flagship-class) Snapdragon 865+, which sits in the middle between Snapdragon 865 and 870. It offers a max of 12 GB of RAM and 512 GB of internal storage.

Despite Mi Mix Fold just went official it is still based on Android 10, just like the Samsung Galaxy Z Fold2. But the latter has already been upgraded to Android 11.

It is still too early to establish which is the best camera phone here. The Xiaomi Mi Mix Fold comes with a 108 MP main camera, an 8 MP telephoto sensor with 3x optical zoom, and a 13 MP ultrawide sensor, as well as a new Surge C1 proprietary image co-processor.

Despite the Mi Mix Fold is a newly-announced foldable phone and Galaxy Z Fold2 is not, it is not superior to Samsungâ€™s offering in every aspect. It has better hardware and a bigger battery, but with the Galaxy Z Fold2, you get wireless charging and a better internal display. Which one would you pick?

Google Chrome for Windows 10 Gets Dark Mode. How To Enable...