Last year, reports emerged that both vivo and OPPO are working on their first foldable smartphones. The OPPO Find N popped up with so much hype, thanks to its virtually crease-less display, among other things. And now, a new leak has revealed that vivo will soon be joining OPPO at the foldables club too with a device that may be called the vivo NEX Fold.

The information comes from tipster Panda is Bald who has also revealed a few specifications of the device. Its battery has been tipped to be sized 4,600mAh and will support up to 80W fast charging. While this isn’t the fastest around, the tipster has called it “luxurious” likely because of the fact that the speed is reserved for flagship BBK phones like the OnePlus 10 Pro and the upcoming OPPO Find X5. 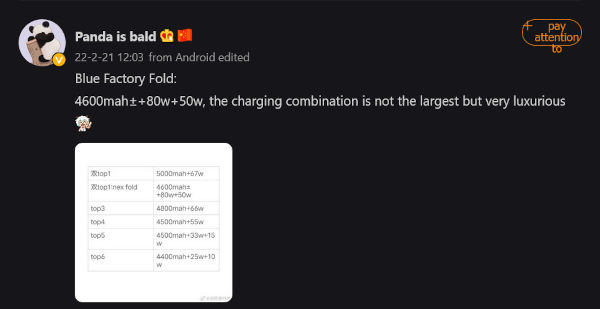 Another bit revealed about the vivo NEX Fold is that it will come with a 5x periscope zoom lens. Again, periscope lenses are typically reserved for flagship-level devices so it’s kind of obvious that specs in other departments will be flagship-level too.

Meanwhile, vivo is also set to launch its next flagship smartphone series. Dubbed vivo X80, the series may be comprised of four X80 models such as the vivo X80 SE, X80, X80 Pro, and X80 Pro+. From these, the alleged X80/X80 Pro recently surfaced on AnTuTu with the all-new Dimensity 9000 chipset, achieving some really impressive scores.

Twitter is testing “Leave This Conversation” feature, to untag yourself from a threads