Google decided to enter the mid-range segment with the release of Pixel 3a and 3a XL in 2019 and followed it up with theÂ Pixel 4a in 2020. The device is here already and is a good deal at $349. Now, reports about the next iteration, supposedly Pixel 5a, a purported Pixel XE has now appeared online. 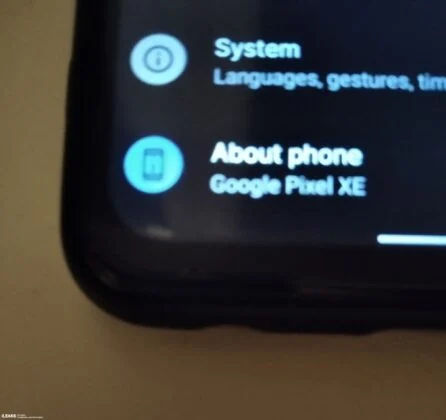 The reason we are talking about the mid-range segment here is due to one of the images showing the deviceâ€™s CPU frequency. Besides, before we question the genuineness, letâ€™s look at them first. As reported byÂ TechRadar, the leaks show a punch-hole display, NFC, andÂ  CPU of the alleged Pixel XE.

The first one on slashleaksÂ showsÂ four images. As you can see below, an image shows that the device has a centered punch-hole display. It has the name â€œGoogle Pixel XEâ€ as displayed in the Settings->About Phone. If you recall, the recently launchedÂ Pixel 4aÂ eliminated the notch and began theÂ punch-hole trend in the Pixel lineup.

Later, Google followed it withÂ Pixel 4a 5G and Pixel 5Â with punch-hole displays. It must be noted that all these devices have a punch-hole at the top left, unlike this leak. Moving on, another image also showsÂ NFC, Bluetooth support options inside the â€˜connected devicesâ€™ page.

Additionally, the device seems to have a Dual-SIM card support one of which could be an e-SIM. To top it off, one of the leaks, as spotted by Tomâ€™s hardwareÂ showsÂ theÂ CPUÂ frequency on the device to be 1.8GHz and runningÂ Android 11. Now, this could either mean one of the new mid-rangers ofÂ QualcommÂ processors, or as Alex Dobbie of Android CentralÂ says, a prototype of the already tested Pixels.

The uncertainty of the CPU debug screenshot, and the fact that one can edit the names in settings makes them a bit questionable. Also, if Pixel were to be seriously working on a device, itâ€™s codename should have leaked by now. For instance, we saw a report after Pixel 4aâ€™s launch that aÂ successor Pixel 5a with codename BarbetteÂ in the works.

Nevertheless, these are very early claims and hence, letâ€™s wait for some concrete leaks to know about their existence.

Messages for Web gets RCS settings, now available on Google.com

Ahmed Musa steps down as assistant captain of the Super Eagles