Talking about the flagship scene, Nokia has been found wanting for more than a year now. While other manufacturers launch at least two flagship smartphones per year, HMD GlobalÂ could only boast of the 2019 Nokia 9 PureView as at present.

Several reports have been flying around claiming that the manufacturer is working on a new flagship called the Nokia 9.3 PureViewÂ which will come with a more powerful processor and upgraded cameras. The last we heard was that the phone will eventually be announced in December after multiple postponements. However, the latest report says that the phone will no longer launch this year.

The info comes from Nokia anew (nokia_anew) and according to a tweet they posted, the Nokia 9.3 PureView will not launch this year as the announcement has been postponed to the first half of next year. 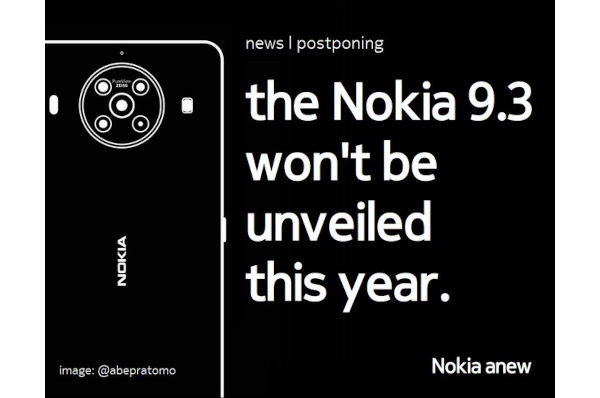 The source said in a reply that the info was not a joke as they have received confirmation. It is also stated that the new date (month) is unknown.

While the info above is an unconfirmed report and should be taken with a grain of salt, it wouldnâ€™t be surprising if it turns out to be true. The phone which is expected to be powered by theÂ Snapdragon 865Â has been postponed more than once already, so another postponement will not be unusual.

The phone was expected to make its debut in December along with theÂ Nokia 7.3Â andÂ Nokia 6.3Â smartphones but with a move to next year, our guess is that HMD Global may be making a major change to the phoneâ€™s specifications or may believe December is no longer the best time to announce such a high-profile phone.

If it is making a major change to the phone, we presume that the Snapdragon 865 processor may be dropped in favor of the Snapdragon 875. If that is the case, the Nokia 9.3 will most likely arrive later in the first half of the year rather than early due to the availability of the processor.

However, if the decision to move the date is based on December not being a good time, then the phone should arrive early next year with the Snapdragon 865 on board. That would not be unusual seeing as the Nokia 9 PureView launched in 2019 with the flagship processor of 2018.

HMD Global needs to get its act together unless its long term plan is to keep making features, entry-level, and mid-range phones.

Samsung Galaxy M21 Details Leak alongside Colours For The M11 And...