By Andre Falana On Nov 13, 2017
Share
Join Us On Telegram
When Apple introduced its latest security feature, Face ID,
the company received spectacular praises from all angle but when it the same
Face ID appears to have loop holes… Hmm. 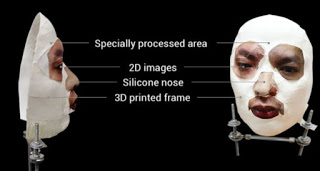 The Face ID was introduced in the iPhone X to replace the
Touch ID, since the design of the phone does not grant any space for the
fingerprint scanner at the front and Apple refused to place it at the back – A
class of its own.
Apple claims that Face ID is so secure that the odds of a
random person using their face to break into someone’s iPhone X is one in one
million. But a security firm called Bkav has been able to bypass Apple Face ID
and trick it because it understand how AI works.
For example, silicone was employed for the nose and 3D
printing was used on other areas. The security firm says that Apple is relying
too much on the feature’s Artificial Intelligence.
Related Posts

The mask cost $150 to make, and Bkav says that with its
ability to break into the iPhone X, the mask could be used to learn personal
secrets from political leaders, business executives and billionaires.
The firm
says that facial recognition is not a good security tool and says that when it
comes to biometrics, a fingerprint scanner is the best way to keep intruders
from breaking into your phone.
Bkav released a video that shows how the mask beats Face ID
but it doesn’t include all the details. The firm says that is because their
experiment is a proof of concept whose purpose is to prove a principle.
Thus far, we are still waiting for Apple to comment on the
latest flaw.
Source
iOS 11Security
Share

How To Restore Your Deleted iPhone Apps