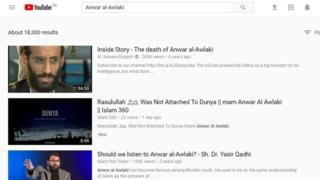 Awlaki was renowned for preaching violence as a religious duty, although at the time of his death his family denied he was a terrorist.

The remaining videos are mainly documentaries and news items, reports the New York Times.
It is believed that the removal processes was as a result of human review, not machine learning.
Slow to act

To help ensure that the videos stay off YouTube, once humans flag a video for removal it is run through a formatting system that creates a digital fingerprint or “hash”.
Uploaded videos are compared to this hash to spot when people are trying to share copies of banned content.
Awlaki posted many different types of videos to YouTube.
Some were explicit calls to violence, but others were commentaries on Islam and its history.
Most of these videos are believed to have been purged from the site.

If he were alive today, Awlaki would have been banned from owning a YouTube channel because he was named as a terrorist on UK and US government lists.
Anti-extremism groups lodged their first complaints about Awlaki’s videos in 2009, but until last year it was still possible to find copies of his most explicitly violent material on YouTube.
A long series of complaints and reports from groups working to counter extremism detailed Awlaki’s influence and called on YouTube to act.
Alexander Meleagrou-Hitchens, from George Washington University’s research programme on extremism, told the New York Times that YouTube “deserved credit” for removing the videos.
YouTube’s design often led people to discover Awlaki’s content inadvertently, he said.
However, he added, Awlaki’s videos were still easy to find on other video sites and social networks.
Source
ALSO READ:  Apple Announces iOS 13 With Dark Mode, Swipe keyboard and Many More

Beware! These Tecno Phones Has Malware That Steals Your Money