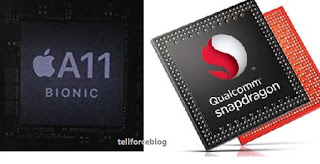 Since the inception of iPhone, Apple has produced a
performance gap between its handset and phones powered by Android, by fashioning
out its powerful chipsets employed on its smartphones. The released AppleiPhone 8, iPhone 8 Plus and the about to be released iPhone X came with the A11
Bionic chipset deployed in it.
The founder of Primate Labs, John Poole, the company that created
the Geekbench benchmark test, said that the latest iPhone models scores more
than 50% higher on Geekbench when compared to Android flagships. Now, this made
Poole to get concerned about the performance gap.
Related Posts

“The thing that I
don’t fully understand is why performance has seemed to stagnate on the Android
side. Where you don’t see these big leaps forward. I don’t understand what’s
happening there. At this point, you’ve got desktop-class performance in a
handset. There’s no way of looking at it any other way. I wouldn’t have thought
to use my first-generation iPhone to edit video. I would’ve thought you were
crazy.”-John Poole, founder, Primate Labs.

The decision by the iPhone maker to start designing and
developing its own chips gives it an added advantage over others and helps it figures
out the track it’s going with the iPhone. While Samsung manufactures the Exynos
chipsets and Huawei has its domestic Kirin line, Android phones can be produced
by some various manufacturers, each shops their chipsets from a different
chipmaker. This brings an uneven performance and makes it more difficult for
Android to even get closer to Apple.