By Andre Falana On Mar 29, 2017
Share
Join Us On Telegram
Recall that the Beleaguered Kogi West Senator Dino Melaye
was on Monday 27, 2017 cleared by Vice Chancellor of Ahamadu Bello University,
Professor Ibrahim Garba on certificate and graduation arguments. 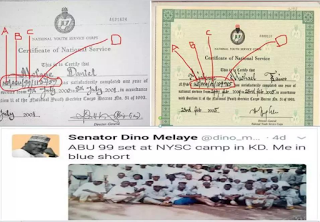 1. Inconsistencies in
his names
What precisely is the name of Mr. Melaye? Below are five
possibilities for this:

2. Harvard and LSE
Remember that in a video clip that went viral, Melaye
claimed that he possessed a degree certificate from Harvard University and
London school of Economics and political science respectively. But, both
refuted his claim, in an email letter to Sahara Reporters, that they ever
admitted any student by the name Melaye not to talk of being their graduate.

3. Ghost graduate
Sahara Reporters posted the list of ABU 99 set with Dino
Melaye’s name noticeably missing. Who was a student from a university but does
not make the graduating list?

4. No show on the
alumni site
Search have been conducted for Dino Melaye’s name on the ABU
alumni site but all was futile. I have typed all of his names and their
variants; nothing came up. I have also typed each of his names separately,
still, no show. How is that possible?
Also Read: Photo:
Ali Ndume lied! I finished NYSC in 2001 – Dino Melaye

5. Deficiencies in O
level certificate
Sahara Reporters revealed that in his SSCE which he sat for
in 1992, Dino Melaye had only 3 credits in the following subjects: Agric, CRK
and Biology. Now, the question is, how did he gain admission into ABU in spite
of scoring P8 in core subjects (Maths, English and even geography)?

6. B.A. Geography?
A dig into ABU’s website revealed that the department of Geography
was once in the faculty of Arts before it was later added to the faculty of
Sciences. However, Dino’s statement of results leaves more questions than
answers. For instance, between 1973 and 2011,the department graduated the following students with BSc in Geography:

So where did Dino who graduated in 1999 get his B.A. result?

7. Conflicting dates
on the statement of results
At least, Dino Melaye’s statement of results has 3 different
dates: on the top right corner of the paper is 26th June, 2000; somewhere in
the middle is 3rd February, 2000 and down left is 22nd September, 2010. What
happened?
Dino, if you find yourself in a pit, stop digging. This is
your Waterloo. We are keenly watching.
Dino MelayeNewsScandalSenator Dino Melaye
Share