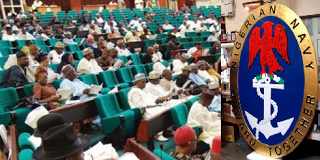 House of Representatives has instructed the ministry of
defence to halt all further arrangements on commercialisation of the Nigeria
Navy by foreign groups, managed by Shorefac Consortium Limited

The House states that the Nigerian Navy, working together
with Shorefac Consortium Limited of which has solid international affiliations
will lead to unwarranted exposure of the country to foreign intrusion
House of Reps has also warned of a new cabal evolving in the
Nigerian oil and gas sector.
The Representatives has branded what it described as new
cabals, whose main target is to steal and divert Nigeria’s crude oil and
liquefied gas to international destinations.
According to Vanguard, So as to check the rise of the new
cabal, the House in its determination, directed the ministry of defence to halt
all further movements on commercialisation of the Nigeria Navy by foreign
groups, led by Shorefac Consortium Limited.
Related Posts

The agreement made by the reps was as a result of a motion
on matter of urgent public importance sponsored by Ehiozuwa Johnson Agbonayinma,
representing Egor/Ikoba-Okha Federal Constituency of Edo state.
Referring to the motion, Agbonayinma alleged that Shorefac
Consortium Limited of which has a strong international association of trying to
team up with the Nigerian Navy in commercializing the Maritime Services
Department of the Navy
The motion claiming the emergence of the new cabal in the
oil and gas sector states:

“On February 21, 2017,
Shorefac Consortium Limited made a proposal of a business model to the Ministry
of Defence that would deliver 100 fast boats to the Nigerian Navy, together
with an offer of maintenance support, all at no cost to the government.

“Shorefac Consortium,
in order to recoup its investments, would become a commercial partner to the
Nigerian Navy in commercializing the Maritime Services Department of the Navy
which would then be expected to provide security services at a cost to
International Oil Companies and other owners and operators of offshore assets.

“Shorefac Consortium
Limited has strong international affiliations, therefore, engaging such a
company to collaborate with a key arm of the nation’s Armed Forces will amount
to commercializing its core constitutional role and cause undue exposure of the
country to foreign interference.

“Funding of the Armed
Forces is the priority of the Federal Government, which must shield them from
all manners of commercial ventures that could put the country’s security at
risk.

“Commercialization of
any sector of the Armed Forces would bring about profiteering that is devoid of
allegiance to national causes, and ultimately erode the core military values of
order and discipline as personnel would begin to compete to be part of the
lucrative commercial business.”
House of RepsInvestmentNewsNigerian MilitaryNigerian Navy
Share