By Andre Falana On Mar 28, 2017
Share
Join Us On Telegram
In a way to support the validation of his graduating from
the Ahmadu Bello University, ABU, Zaria, Dino Melaye, the senator representing
Kogi West Central has said he completed his mandatory National Youth Service
Corps in 2001. 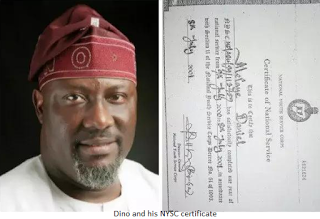 The embattled senator has released a photo of his NYSC
certificate Melaye in a new post on his Instagram page said contrary to statement
by Senator Ali Ndume he commenced his NYSC in 2000 and completed in 2001.
READ ALSO: Senators
Dino Melaye Mocks His Haters After ABU VC Confirmed He Graduated
Related Posts

Melaye said: “Another Ndume lie. I finished NYSC in
2001.”
Find a screenshot of his post below:
Recall that the Vice-Chancellor of the ABU had established
to the Senate Committee on Ethics and Privileges that Melaye graduated as
Daniel Melaye in 2000 from the University.
The VC also said Melaye graduated with a third class
Bachelors’ of Arts degree in Geography.
READ ALSO: Photo:
Senator Melaye Petitions DSS against Sahara Reporters
Ali NdumeCertificateDino MelayeNewsScandal
Share