Last year was a complicated one for many businesses, and the smartphone manufacturers were also affected. According to a report by TrendForce, companies released 1.25 billion devices – that’s 11% fewer compared to 2019. 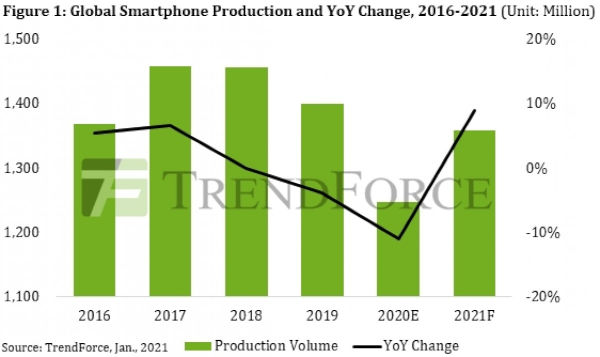 The top six brands were Samsung, Apple, Huawei, Oppo, and vivo, with Huawei’s stake dropping mostly due to the trade ban, preventing the company to work with Google and, more recently cutting its access to chips.

The next 12 months should see a solid rebound in the market. The analysts expect a strong wave of device replacement and demand growth in emerging markets. The annual global smartphone production for 2021 is predicted to be 1.36 billion units or a 9% increase from 2020.

But then again, the forecast for Huawei is grim, pushing the company out of Top 5 by volume, with its market share plummeting to just 3%. The bold prediction also suggests Transsion, parent company of itel, Tecno, and Infinix will see big growth and overtake Huawei.

5G is expected to remain a key talking point in 2021. Expectations are the penetration to rise to 37% but production will be limited due to foundry capacities. TrendForce said smartphone brands aim high and will increase production targets, limiting the capacity of how many devices and components can the factories push out in time.

Dstv To Take On Netflix By Launching A Streaming-only Package