The Google Pixel 5 series is the first 2020 flagship lineup from the company. The tech giant said that the device is made out of metal and a recent durability test video has confirmed that – the metal is actually buried under layers of plastic. 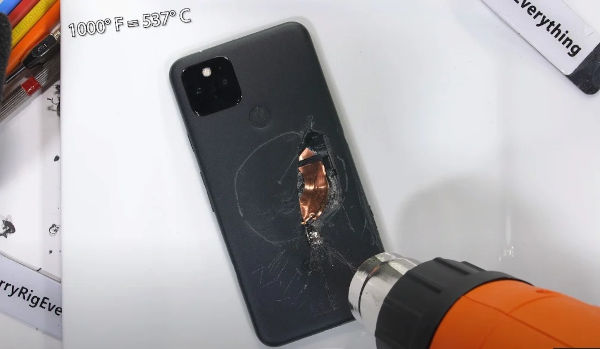 The popular YouTube tech based content creator, JerryRigEverything, took to hunting down this metal that Google promised. In the video, we can observe him stress test and scratch test the Pixel 5. Apparently, the YouTuber wanted to find out for himself whether the company’s claims of using 100 percent recycled aluminum was true or not. Notably, since the Pixel 5 supported wireless charging, the claims from Google of an all metal device was already under scrutiny.

Aside the power button, the rest of the smartphone is covered by layers of plastic. Google calls this finish, “bio resin,” which is just another name for plastic alloy. But, the device does have metal underneath all of these layers, although, one would have to dig around considerably. The video also reveals that once you go deep enough, you finally hit the wireless charging coils and the battery right underneath it.

Sadly, digging too deep had the YouTuber hit the battery, which caused fumes to come out of the rear. So, we advise you to not try this at home. To sum things up, Google did manage to make the device feel like metal, but its all just a clever trick that hides those fancy layers of plastic. You can check out the video yourselves above.

Xiaomi Mi 10 Lite Zoom To Be The Global Name Of...