By Andre Falana On Aug 17, 2017
Share
Join Us On Telegram
Earlier this month, reports surfaced that the next Apple
Watch release would include an LTE version. However, it now appears that the
device will come in both an LTE version and one without LTE. 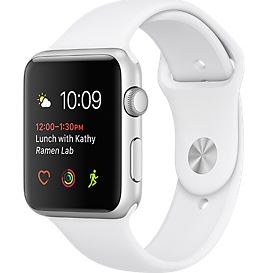 Apple of course has not made any indication that the design
of these Apple Watch models will be any different from previous models. In
fact, it was rumored that the new Apple Watch will be in its usual two sizes,
which are 38mm and 42mm.
Apparently, the new models of the Apple Watch will also use
an eSIM instead of the physical SIM. The cellular connection, also, may only be
used for data transfer.
According to Bloomberg, the cellular Apple Watch will have
LTE connectivity. But it will not offer 3G connection. This would severely
limit the device to certain markets.
This little tidbit of information had already been forecasted by
Ming-Chi Kuo of KGI Securities.
Related Posts

Furthermore, in June this year, Apple announced that new
watchfaces can update based on time of day or location. These would be launching
later this year. Also, the company stated that it would release a Siri
watchface, which could show relevant content. A constant connection would
surely facilitate these updates. For example, users could leave their phones
and still be able to use Siri and respond to iMessages.
Funnily enough, these reports never ruled out services like
Skype and FaceTime for calling. But then, this will simply be another loss if
the cellular Apple Watch cannot handle calls. Also, despite the possibility of
boosting sales for the Apple Watch, Ming-Chi Kuo does not believe that Apple
Watch will gain Android compatibility this year.
Some have suggested adding LTE, which could make the Apple
Watch more independent from the iPhone. This would be a step toward making the
Apple Watch more compatible with Android.
Meanwhile, if Apple does not change, the next Apple Watch,
which should be out alongside the latest iPhone, may have LTE.
Share

How To Hide WhatsApp, Facebook and Telegram Status With Unseen App

Checkout FrontRow: A Pendant With Camera and Touchscreen (Video)