Checkout FrontRow: A Pendant With Camera and Touchscreen (Video)

By Andre Falana On Aug 17, 2017
Share
Join Us On Telegram
Current smartphones have taken over a lot of roles of other
devices: cameras, recording devices, music players and others. But, there is a
device that wants to withdraw the camera function from the smartphone. 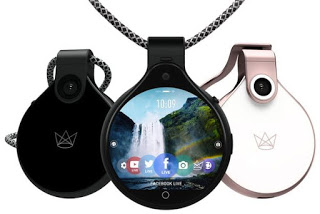 This device which is known as FrontRow, was built to improve
the simplicity of mobile technology. FrontRow is a tiny, coin-sized device with
two cameras, an 8MP camera at the back and a 5MP camera in front. The device
shoots video in 1080p, and it can also stream to Facebook or YouTube for up to
two hours.
According to its makers, FrontRow should be worn around the
neck like a medal, with the rear camera facing out – wish to be a secret
service agent, if you not, there you go.
Related Posts

It also has a little touchscreen, where you can view your
captured content. Also, apart from the photos and videos you can capture with
the device, you can also capture photos and videos and stitch them together.
This Story Mode also makes use of sensor data and some other info to cut out
the poor parts of the captured content.
The creators of the FrontRow camera pendant, Ubiquiti,
expect that people will want to wear the device all the time, so as to capture
pictures and videos more easily. According to Joe Santucci, the product
director of Ubiquiti Networks, all the constant distractions brought about by
notifications tend to take attention away from the actual act of capturing
photos and videos. Therefore, the company produced something really accessible
that could document a whole day without any video edition, for example.
FrontRow does seem like a device that would catch on with a
lot of people. However, Ubiquiti needs to find a niche where the idea of the
pendant camera would work. For example, tourists might find this device useful.
Also, people in places where camera phones are not
convenient or not allowed might find a good use for it. Until the device
becomes popular, however, most people will probably stick to their smartphones.
Source
Camera
Share