By Andre Falana On Aug 21, 2017
Share
Join Us On Telegram
A poster meant for the South Korean mobile market has leaked, reveals that Samsung Galaxy Note 8, 256 GB edition will be manufactured for Samsung’s home land.

Furthermore, consumers buying this model will have the option of an AKG Bluetooth speaker or a Nemonic printer. Those in the region purchasing the 64GB model will get a coupon for 100,000 KRW – equivalent to US$ 88, for the purchase of a Gear VR, a Galaxy Note 8 LED Cover, or a 5100mAh fast charge portable battery pack. 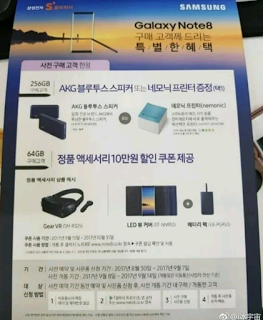 The Korean tech giant would be unveiling the Samsung Galaxy Note 8 this coming Wednesday. Last year was a terrible year for Samsung after the Note 7 fiasco. The Galaxy Note line suffered a great blow after last year’s model had to be ultimately wiped off the shelves after explosion of several units.
Related Posts

ALSO READ: Samsung Galaxy Note 8 appears on Geekbench
The model was almost becoming the most popular Samsung phone ever until the first of two recalls was announced. Earlier this year, 2017, Samsung launched the Fan Edition of the Note which was made of parts taken from unsold Galaxy Note 7 models. A new 3200mAh battery was deployed in place of the 3500mAh cell found in the original phone.
Inspite of the terror and negativity experienced by the Note lines, caused by Note 7, the Galaxy Note 8 is still one of the most anticipated phones of the year.
In the next two days, the Galaxy Note 8 will become official. Ensure you keep checking in right here for all of the details relating to the introduction of the device.
Source
Galaxy Note7galaxy note8
Share