By Andre Falana On Apr 17, 2017
Share
Join Us On Telegram
A great disaster was averted on Sunday, April 17, 2017 after a big vehicle transporting more hundred worshipers from the Deeper Life Bible Church caught fire. 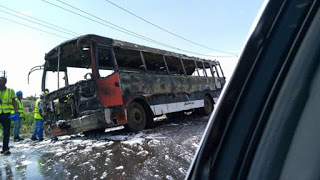 ALSO READ: Photo: Fire Outbreak averted in third mainland bridge
The bus belongs to LAGBUS Transport Company, chattered by the church to convey its worshipers from the camp ground followiing the conclusion of the Easter Retreat.

ALSO READ: Pastor Kumuyi says Nigeria’s crisis will soon come to an end
It was reported that the bus carrying at least 100 members of the church allegedly burst into flames as people shouted and started jumping out for safety before the blazing flames could consume them.
Thanks to the timely arrival of the operatives of the Lagos State Fire Services(LSFS) and those of Lagos State Emergency Management Agency (LASEMA) who rendered help in order for the worshipers to escape from being burnt to ashes. 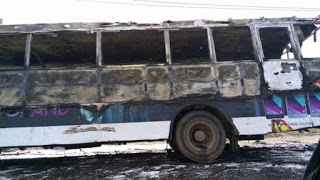 ALSO READ: Photo: Fire Outbreak averted in third mainland bridge
Mr. Rasak Fadipe, who is the Director of Lagos State Fire Service, said his officials got to the scene on time and were able to rescue the church and confirmed that no loss of life was recorded but thd bus was completely burnt down. 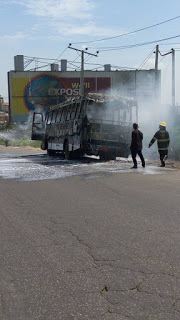