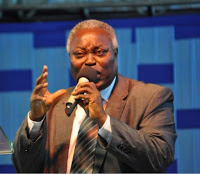 The general over of the Deeper Christian Life Ministry, mostly known as Deeper Life, Pastor William Kumuyi, has admonished Nigerians not stop to praying and exercise patience because there is ‘light at the end of the tunnel.’
The Deeper Life Pastor added that Christians shpuld pray for the peace, stability and development of the nation.
Kumuyi speaking on Sunday, April 16, 2017 after the conclusion of a three-days National Easter retreat, held at the Deeper Life Conference Centre, Km 42, situated along the Lagos-Ibadan Expressway, Ibafo, Ogun state, urged Nigerians to express more love to each other and live in peace irrespective of tribal, religious, or political differences.
Pastor Kumuyi discloses that the crisis experienced by the country will soon end, says there is light at the end of the tunnel.
Related Posts

In his message captioned: “Conquering with the Crucified King”, Pastor Kumuyi said: “We should live in peace with one another; if there is no peace, there is not much we can achieve as a nation.

“Every section of the society should embrace peace so that the nation can move forward; and with our faith in the Lord, things will turn around and change for the better.”
Commenting on the trending suicide reports, he advised people not to commit suicide saying that it is never a way out of the present economic hardship currently faced by the country
“We should not give up, we should not lose hope. People who are taking their lives don’t need to do that because there will always be light at the end of the tunnel.

“When someone had taken his or her life before the light breaks, how would he or she enjoy what the Lord is going to do for the nation?

“I want to encourage everyone to have hope in the Lord because things are going to turn around positively,” the pastor said while encouraging Christians and Nigerians as a whole that the current economic recession and security challenges battling the development of the country would soon come to an end.
NewsNigeriaPastor KumuyiProphecyReligion
Share