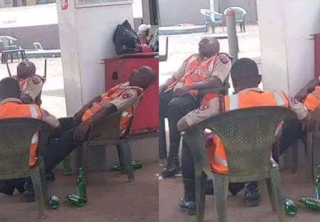 The Federal Road Safety Corp (FRSC) has recalled its corp members, who were allegedly drunk while on duty (normal working hours) in Anambra state.

In a statement issued by the head of Media Relations and Strategy of the Corps, Mr. Bisi Kazeem, he stated that the accused marshals, who are seen in the photographs taken at Tarzan junction, near Onitsha have been identified as men of the Corps from Anambra State Sector Command, specifically from Nteje Unit Command.
Related Posts

Kazeem said that the corp members were assigned to monitor and control traffic for the Easter Special patrol at Tarzan junction, near Onitsha.
He said: “They have been recalled for administrative and disciplinary action at Anambra State Sector Command, Awka, being the Command that supervises the affairs of the Nteje Unit, where they served on the directive of the Corps Marshal, Dr Boboye Oyeyemi, who abhors indiscipline in all ramifications.

“Appropriate disciplinary actions will be taken against them as soon as the administrative panel dispenses with their case.”
CrimeFRSCNews
Share