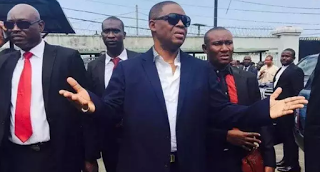 The hearing which commenced with a male police officer, Victor Ehiabhi, narrating how he assisted the Fani-Kayode to collect the sum of N26 million from Sambo Dasuki’s office, the ex-National Security Adviser (NSA), in 2014.
The security agent who introduced himself as an Intelligence Operative with the Force Intelligence Bureau, told the court that he was transferred from the Very Important Persons Protection (VIP) Unit in the bureau, to serve as the former FFK’s security aide before the presidential election in 2015.
Ehiabi said he went with a domestic staff of Fani-Kayode to collect the money which was stashed in a Ghana-Must-Go bag, from the NSA’s office at the Presidential Villa, Abuja.
In the witness’ statement: “On November 21, 2014, on that fateful day, my principal traveled out of town and he detailed me to be within town.

“The gardener and other domestic staff were also around within the premises. The house is at Aso Drive Abuja.

“One of the gardeners, called Francis, called me on phone and told me that the defendant had called him on phone that I should accompany him (Francis) and another domestic staff, Esther, to the National Security Adviser’s office at the Villa.

“And not too long after, the defendant himself called me and told me the same thing. The driver named Kenneth was directed to drive us to the venue.

“We moved to the venue at Suleiman Barawo Street in the Villa. While at the venue, the driver, Kenneth, and the gardener, Francis, were asked to stay in the compound while I and Esther walked into the building.

“We identified ourselves as personnel of the defendant. The staff in the office asked who was Victor. I answered I was the one. They asked me to tender my identity card and I did.

“The man in the office brought out a paper and asked me to endorse it on behalf of the defendant. The sum of the N26m was written on the document for the defendant.
Related Posts

“The man in the office brought out the sum of N26m in N1,000 denominations, and put it in one ‘Ghana-Must-Go’ bag. He gave it to us, Esther and I, for the defendant.

“We took it out of the office and beckoned on Francis and Kenneth to take it to the booth. So we departed from the house and departed to house of the defendant with the money.

“On getting to the house, we took it inside the house. As of the time the money was taken to the house, the defendant had not returned. As I said earlier he had travelled out of town.”

Based on Vanguard’s report, Ehiabi said that upon the return of Fani-Kayode to Abuja, he invited him and others involved in the movement of the cash home and appreciation them.
The policeman said: “The defendant had called me on phone and told me to ensure maximum security within the house until his arrival.

“Subsequently I was invited by the EFCC. On getting to the office of the EFCC, I was asked if I ever worked with the defendant and I said yes.

“While answering the question, the personnel brought out the document that I signed at the Office of the National Security Adviser on November 21, 2014. There and then I was made to write a statement.”

Meanwhile, the counsel to the accused, Wale Balogun, pleaded for an adjournment to allow him to cross-examine the witness.
In response to the application, Justice John Tsoho, who presided over the case adjourned the matter till June 6, 2017.
Mr Johnson Ojogbane was the prosecuting counsel.
CourtFemi Fani-KayodeFFKJudiciaryNews
Share