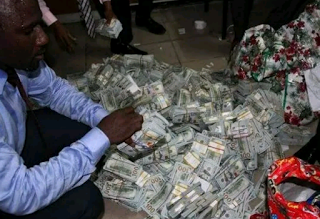 It has been reported that the Economic and Financial Crimes Commission (EFCC) has gotten details its wanted on how the controversial recovered $43.4million cash was kept in an apartment in Osborne Towers, Ikoyi, Lagos.
According to The Nation report, detectives are set to question an ex-governor over the retrieves fund in the Ikoyi mansion, Lagos.
It was also reported that a few high-profile owners of houses in Osborne Towers, Ikoyi, Lagos will have to be interrogated over the issue.
The EFCC was said to be suspecting that some landlords or tenants within the areas.
According to a source who said: “The more we investigate this $43.4m haul, the more we get fresh facts. It has become imperative to interact with some owners or tenants of apartments in the Towers.

“We have invited a former governor and other high-profile owners and tenants for interaction. It is just to ask a few questions on whether or not they were aware of such movement of cash.
Related Posts

“We have clues linking some occupants of the Towers to the cash haul. And in line with sections 16 and 17 of the EFCC (Establishment Act) 2004, we are inviting these landlords or tenants.

“Unless we get to the root of this case, Nigerians may not know the truth or otherwise about the cash.

“We are not saying that those invited are guilty of any infraction or having link with the $43.4million but we need to hear from them – in line with the ongoing profiling of those in the Towers.”

Another source says that the security operatives discovered that the 7B Apartment was acquired in the name of a firm supposedly owned by a senior government official’s wife.
“Since investigation is still ongoing, we will not release the identity of the owner of the company. Doing so might jeopardise investigation,” the source said, adding that the EFCC had interacted with “some people from the company.”

A source from the National Intelligence Agency (NIA) said: “What happened was that because of the nature of the covert operations which the apartment will be used for, it was necessary to manage the process well.

“Only the Deed of Assignment was acquired by Thabis Ventures Limited on behalf of NIA. And immediately the process for the purchase of the apartment was completed, the ownership was clearly stated in the name of NIA. All the papers are reflecting NIA too, he said, adding: “The title document is available for anyone to verify.”
corruptionEFCCMoney LaundryNews
Share