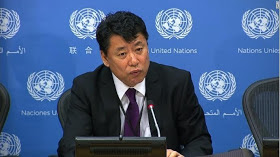 Could this be the beginning of the end as predicted by the popular old French astrologer and physician, Michel de Notredame also known as Nostradamus. Thinking about some of his prediction which had came to pass and the ones the world is waiting to see, according to Wikipedia.
When you see a goat confidently challenging an elephant to a village fight, then you have to suspect something. It’s possible that another elephant is in one corner waiting to ambush the later.
ALSO READ: North Korea trys to launch a new missile but fails
North Korea’s officials at the United Nations, Kim In Ryong, has uttered words of threats towards the United States of American, saying it was just a matter of time before a nuclear war commenced between the two country.
Speaking at the press conference organized by the United Nations in New York on Monday, April, 17, 2017, Kim claimed the US keeps using a gangster style and causing global unrest.
Related Posts

His statement follows that of the US Vice-President’s own. Mike Pence, the US VP warned the North Korea government not to test the peace of the United State during his visit South Korea.
ALSO READ: North Korea trys to launch a new missile but fails
In the statement, Kim said: “It has created a dangerous situation in which thermonuclear war may break out at any moment on the peninsula and poses a serious threat to world peace and security.


“The US is disturbing the global peace and stability and insisting on the gangster-like logic that its invasion of a sovereign state is decisive, and just, and proportionate and contributes to defending the international order in its bid to apply it to the Korean Peninsula as well.


“My country is ready to react to any mode of war from the United States. Any missile or nuclear strike by the United States would be responded to in kind. Their maneuvers show the US reckless moves for invading the DPRK (North Korea) have reached a serious phase.


“We would hold the United States accountable for the catastrophic consequences to be entailed by its outrageous actions.”

My haters are my advertiser – T.B Joshua