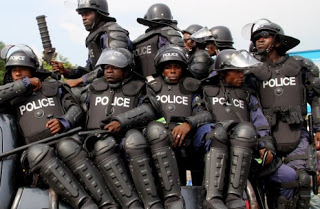 A deadly and notorious bandit identified as “Tompolo” has been murdered by men of the Nigeria Police Force, in Enerhen Police Divisional Headquarters.
The operation was carried out in collaboration with a joint patrol with members of SEDCO Community Vigilante on Sunday, April 9, 2017.
CSP Hassan Galadima, who is the divisional police Officer of Enerhen, has confirmed the report to journalist, he said: ” I’m aware of the incident. It’s not just the vigilante that killed the robber. They were on patrol with the police. We shot him and the rest escaped with bullet wounds. We recovered from them some expended and live cartridges inside the gun.”

It was gathered that Tompolo and his cohorts engaged themselves in shoot out with the security officials and died in the process after being hit.
The notorious criminal got killed moments after he and his men was said to have robbed an unnamed woman at gun point around 5am.
About three of the criminals escaped with bullet wounds in Dugbo Estate, Uvwie Local Government, Delta state, where the shoot out occured.
Daily Post reported that Tompolo was his nick-named and was popularly known by that and was said to have been terrorizing the area until he met his untimely death.
It was reported that the victim (woman) who Tompolo and his gang waylaid and attacked, was travelling for business.
CrimeNewspoliceTompolo
Share