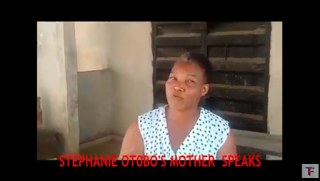 The Canadian-Based stripper, Stephanie Otobo who claimed that the founder of the Omega Fire Ministry, Apostle Johnson Suleman had one promised her marriage.

She also claimed to have been forced to abort the pregnancy she had the clergy. She even wrote petition against Apostle Suleman based on the alleged pregnancy she had for him to the Nigerian Police. Read here.

Below is the video of an interview with Ms. Stephanie Otobo’s mother who pleaded with Apostle Suleman to pardon her daughter “because of
God”.

She further added that she had not seen her daughter for many years now and she has
refused to pick her calls.

Textile Dealer Who Attempted Suicide By Jumping Into Lagoon, Charged To...