By Andre Falana On Mar 26, 2017
Share
Join Us On Telegram
DSS in its latest
letter sent to the Assembly contained incriminatory details that pinned the
EFCC box 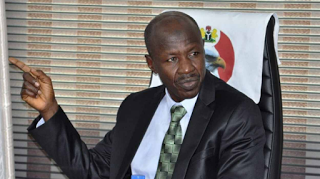 A report by SSS was made available by a set, Advocacy
Justice to media on Friday March 24, gave insights to the incriminatory details
filed by the SSS to the Attorney General of the Federation (AGF) and Minister
of Justice in respect of the EFCC boss denial by the Senate in December 2016
According to NAIJ.com, the SSS, in an undated 7-page letter
which mentioned a letter from the AGF dated 19 December, 2016 with reference
number HAGF/DSS/2016/VOL1/7, gave more perceptions into the security report presented
to the Senate.
The letter with the title: “Re: Request for Additional Document /Information,” signed by
Folashade Bello on behalf of the DG SSS, provided details of how the SSS reached
its 14-paragraph indictment of Magu in its October 3, 2016 report to the
Senate.
The SSS letter to the AGF has different side from A to L (a
total of 12 documents) providing details of the discoveries on Magu.

Annexure ‘A’,
according to the report, contained minutes of the 20th plenary meeting of the
Police Service Commission on 20th December 2010, chaired by Mr Parry Osayande.
The annexure indicates that Magu was indicted after he was placed on disciplinary
process and awarded “severe reprimand” for actions prejudicial to state
security.

Annexure ‘B’,
according to the report, contained a copy of professional statement of Air
Commodore Mohammed Umar (rtd) who claimed to be the owner of a company that
furnished the residence of Magu.

Annexure C, the
report said, contained an allegedly forged memo said to have originated from
the office of the Vice President but recovered from the home of Umar. The
report stated that the vice president’s office formally disowned the said memo.

Annexure ‘D’, the
document presented a letter from the office of the vice president affirming
that Annexure ‘C’ was forged.

Annexure ‘E’, the
SSS indicated that it attached a copy of the progress report which was a
confidential document from the Chief of Staff to the President but found in
Umar’s residence.

Annexure ‘F’ was
also said to contain bank documents in respect of EFCC’s recovery funds account
said to have also been found in the residence of Umar during a search.

Annexure ‘G’ is
said to contain a letter from the office of the National Security Adviser on
the request to freeze an account which was recovered from Umar’s residence.

Annexure ‘H’ also
contained a document addressed to the EFCC chairman from the NNPC on request to
stop a debit order on an account. It was said to have been recovered from
Umar’s residence.

Anexures’ I’ and ‘J’ are also said to have been
recovered from Umar’s residence and they are said to contain sensitive
documents belonging to the EFCC but emanating from the NNPC.
The letter also claimed to have attached annexures ‘K’ and ‘L’. The annexures were said to be documents recovered from Umar’s
residence after a search.
The letter read: “An
officer appointed as Ag. Chairman of EFCC should by all means be of impeccable
credentials, with proven integrity and capacity to lead the nation’s fight
against graft in high and low places. This far, it is evident from Magu’s
antecedents that he is by no means that kind of officer.”
The letter also stated that Magu exhibited “total lack of judgement by moving into a
tastefully furnished accommodation without any scrutiny of how it was
furnished.”