By Andre Falana On Mar 29, 2017
Share
Join Us On Telegram
The federal government of Nigeria has allegedly arraigned
the national commandant of the Peace Corps of Nigeria, Dickson Akoh, before an
Abuja Federal High Cour. 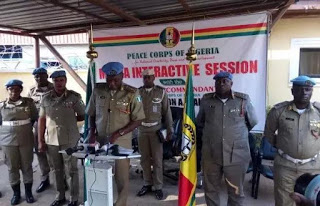 According to Daily Trust, Akoh and the incorporated trustees
of Peace Corps of Nigeria, ITPCN, have been smashed with 90 counts.
Tellforceblog
learnt that they were purported to have laundered an total sum of N3.5 billion gotten
from extortion in April, 2016.
Related Posts

The report explained further that the prosecution alleged
that the suspects operated as a non-profit making establishment but illegally
engaged in the business of providing security services under a enlistment
scheme, including quasi-military training without approval.
He was said to have acquired huge sums of money by deceitful
activities while laundering the ensues of extortion from innocent citizens of
the country from the ITPCN account to his personal account.
Akoh pleaded not guilty to all the allegations.
CourtCrimeJudiciaryNewsPeace corpPeace Corpspolice
Share