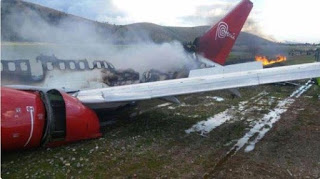 A Peruvian airliner carrying 141 passengers on board has
been involved in an accident at the Francisco Carlie Airport in Jauja, Peru
Reports said that the airplane, Boeing 737-300 which was a special
flight from the capital, Lima, to Jauja, swerved off the runway and burst into
flames upon its arrival at the airport around 4:30 pm on Tuesday local time. 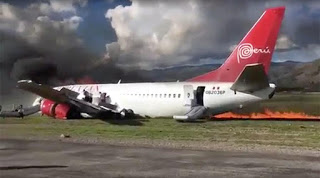 In a statement released by the carrier, it said none of the
passengers on board suffered any severe injuries from the crash, saying that
all travellers were safely evacuated from the aeroplane.
However, according to Le Republica, atleast 26 people,
including a child, were wounded in the event.
Eyewitnesses said the pilot lost control of the plane in
high winds, while another report claimed the flame was caused by an exploding
tire. 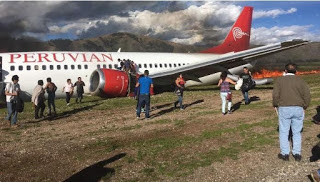 Peruvian Interior Minister, Carlos Basombrio said the fire
had possibly started when the plane’s wing scraped the runway.
Speaking to the local media, Basombrio said: “The plane
couldn’t stop on the runway and they made a maneuver to stop it with the wing
and that appears to have caused the fire.
However, investigation on the reason for combustion has been
commenced. 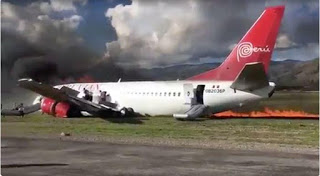 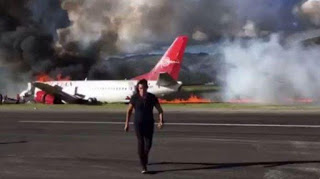 Lionel Messi suspended for 4 games and fined $10,200 for insulting referee