Counterpoint Research has shared its analysis of the global smartphone market for Q1 2020, but the reports does not look great at all. The world is currently being battered by the novel Coronavirus (COVID-19) pandemic and virtually every industry is being hit hard by this outbreak. The smartphone shipments is also among those negatively affected, even though smartphones sales across the globe have been declining over the past years.

The smartphone shipments fell by 13% on a yearly basis, with the total being under 300 million – a number that was last reported in 2014.

There were only two major companies that did not suffer a yearly decline in shipments – Xiaomi and Realme. Other manufacturers saw a decrease, but the overall picture still remained the same – Samsung and Huawei are top sellers, Apple is comfortably third, and then several of China-based companies battling for the last two spots on the Top 5 roster. 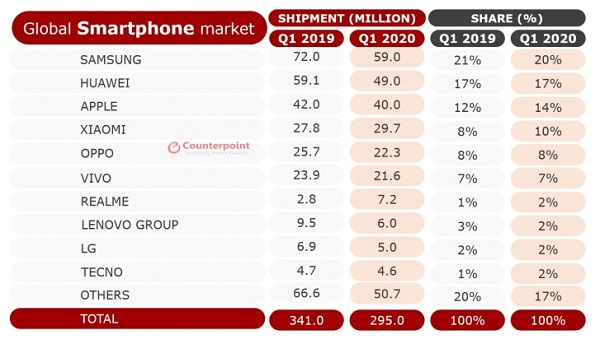 According to Counterpoint, the effect of the pandemic will further bring worst report in Q2 2020, with some markets struggling more than others. The Chinese market is already recovering, so companies that are strong there, like Huawei or Oppo, will see a lesser impact of their sales, compared with Samsung – all major markets of the Korean company are under lockdown.

Offline buyers and lower income earners won’t be able to match the consumer behavior from before the pandemic, so the entry-level segment will be the most affected emerging economies. The midrange segment will keep driving volumes, while the premium segment is least likely to be directly affected – sales are expected to rebound once all this situation is over.

Advertisement
Join Us On Telegram
ALSO READ:  Mobile Chrome Browser Set To Be 28% Faster Than Before
Advertisment