The Samsung Galaxy A31 has been launched. The phone when compared to M31, it’s more slender thanks to the taller aspect ratio of its 6.4-inch Super AMOLED screen. Also, the handset has an in-display fingerprint reader instead of a rear-mounted one.

The screen has 1080p+ resolution and an U-shaped notch on its top edge to house the 20MP selfie camera. The 20:9 aspect ratio makes the A-series phone 2mm narrower than the M31, it’s also a fraction thinner and lighter.

The quad camera on the rear looks and functions similarly to the M-phone. It’s made up of a 48MP main sensor (f/2.0 aperture, 0.8Âµm pixels), 8MP ultrawide-angle cam (123Â°), a 5MP dedicated macro shooter and a 5MP depth sensor.

Samsung is yet to give much details about the chipset, but according to leaked benchmarks, the phone is powered by a MediaTek Helio P65 chipset. It has two Cortex-A75 CPU cores, which are newer and more powerful than the four A73 cores inside the Galaxy M31. Even so, the performance battle between the two will be close.

Anyway, the phone comes with 4GB of RAM and 64GB storage as standard with a 6/128GB option for those who want more. The microSD card slot can be used to add up to 512GB more to the storage pool.

The Samsung Galaxy A31 is powered by a 5,000mAh battery, which supports 15W fast charging through the USB-C port.

Samsung Galaxy A31 Price and Availability

The price is yet to be revealed. 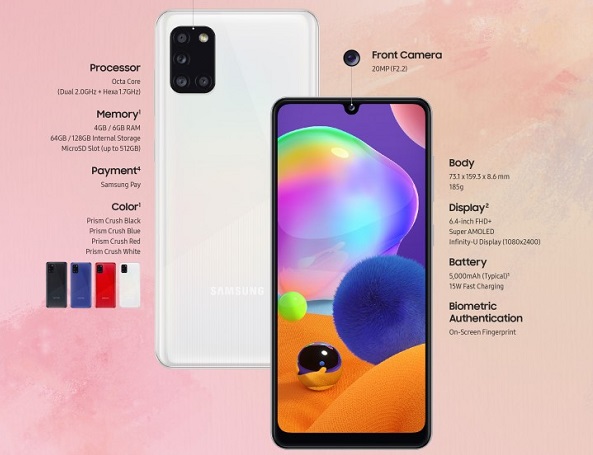