When everybody was fixing their eyes on Android OS and iOS, a silent revolution was gradually covering some ground with little or no care from others. In 2016, a team built KaiOS on the back of the now discontinued Firefox OS, and already have it on 30 million phones in North America and India. Sometimes, there is no hype around the revolution. It isn’t tweeted or televised.

This is the mobile platform behind the new generation of 4G-capable, smart feature phones that we have been talking about. Yes; those phones that will keep the other half of the world connected.

Let’s put this in perspective. While Windows Phone and Windows 10 Mobile and BlackBerry OS were dying off, KaiOS popped up and grew. And its growth has been noticed by big players like Google, Facebook, and Twitter, who have committed resources to developing for it.

Google apps support means that the platform can synchronise your email, calendar and contacts. Voice Assistant, Google Maps, and Google Search are in the mix too. Of course, Facebook and Twitter are two of the most popular social networks around. What would be great now is for WhatsApp support to be added, and KaiOS would be ready for prime time.

KaiOS is a mobile operating system based on Firefox OS, meaning it is web-based and built on HTML5, CSS and Javascript. These are basic technologies. The platform is so lightweight that it runs smoothly on phones with only 256MB of memory. Light as it may be, the beauty of KaiOS is how it also supports advanced features like 4G/LTE, VoLTE, Wi-Fi, NFC, apps and an app store, dual-SIM support, and QWERTY keyboards. 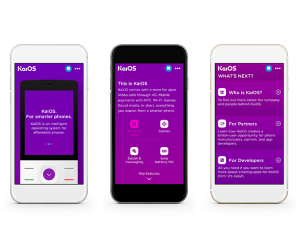 The whole idea behind KaiOS is that it puts the smart in light and affordable phones.

These are the cell phones that run KaiOS:

The KaiOS team says the platform now runs on 30 million phones in the U.S., Canada, and India. I have been unable to find any independent verification of this claim though, but I shall keep my eyes open. But in essence, it means that between the Alcatel OneTouch Go Flip and the Reliance Jio JioPhone, 30 million units have been sold. The Nokia 8110 4G is yet to hit the market.

The Rise of Smart Feature Phones

Feature phones used to be something that were spoken of in a condescending manner. It was for poor people only. While it is still predominantly a poor people affair, the feature phone is also seeing an uptake in advanced mobile markets. Smartphone owners are buying feature phones as backup phones, especially for their long battery lives.

Imagine having a small cell phone that has super fast 4G broadband internet, basic apps, and a week-long battery life in your pocket. Now you can eat your cake and have it. Perhaps the 3rd smartphone platform will be a smart feature phone OS, one that is blurring the lines between smartphone and feature phone.