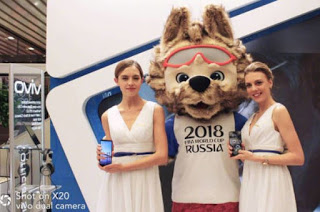 vivo was earlier announced this year as a partner with FIFA
for the next six years, which automatically included two World Cup tournaments years
– Russia 2018 and Qatar 2022. Now, as part of the deal, vivo unveiled the X20
FIFA World Cup edition. Just like the regular vivo X20,
X20 FIFA World Cup edition comes with a dual camera on the back and a FullView
6.01” screen on the front.
ALSO READ: Vivo X20 Specifications, Features and Price
The FIFA World Cup edition is powered by the same Snapdragon
660-powered phone which supported with a 4 GB RAM and 64 GB storage with an
option to add up to 256 GB more via the hybrid SIM/microSD slot. The major difference
between the regular and the FIFA World Cup Edition is simply beautiful football
tournament logo printed at the lower back 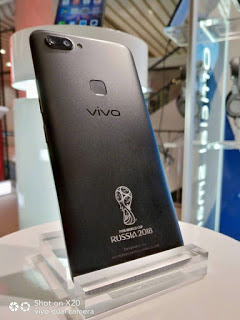 All FIFA officials will get the phone and will use it during
the World Cup in Russia 2018 tournament that is taking place between June 14
and July 15. The device was unveiled at an event in Moscow, Russia ahead of the
World Cup draw.
Join Us On Telegram
ALSO READ:  Popular Android Apps Are Also Among Thousands Marked Dangerous And Risky On Google Play Store
Advertisment