Here Are Some Twitter Tricks To Try Out For Android App

By Andre Falana On Dec 7, 2017
Share
Join Us On Telegram
The popular micro-blogging platform, Twitter is making it big time into heart of almost everybody on earth. It’s currently one of the biggest social media platforms. The major reason for its wide acceptance is not far-fetched from the ease of access it provides to breaking news. 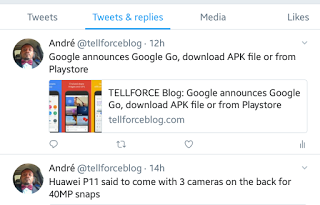 Below are some tips and tricks to try out on Twitter for Android.
1. Turn off image preview: On the mobile app, whenever there is a tweet of an image, Twitter allows you to view it directly on your timeline. You can turn this off and save space on your display and to do that:
Just go to Settings > General > Image Previews to change to picture links.
2. Did you know that you can use more than one account on your Twitter app? Unlike some other social media apps, you can use two or more Twitter accounts on the same account.

Go to Accounts > Add Account to set up a new account. You can also switch between accounts from there.
3. Twitter has a feature called While You Were Away. This brings you the best tweets posted since you last launched the app. you cannot turn this off, but you can reduce the times it is shown.
Related Posts

Just tap on the cross icon. After that, tell Twitter you didn’t like seeing this feature on the next dialog box.
4. Making it easier for people to find you on Twitter if you want. Or you can make it hard.
Go to Settings > General, then choose whether you want to be found by email or phone number.
5. Adding location to your tweet. When you compose a tweet, you will find a map pin icon at the bottom left of the screen.
Tap this to attach a location to your tweet. You also need to activate Location on the General tab of Settings.
6. Customizing your app notifications in order to avoid getting alerts every five seconds. Open Settings, tap on your Twitter handle, then choose mobile notifications. You can select what actions will cause you to get notifications. You can also turn off notifications altogether.
7. Sharing tweets outside the app itself. Just tap on the Share button and you can sendit to apps like Dropbox and Gmail.
8. Refining your search results on the mobile app. However, it will not be as good as on desktop. On the search results screen, tap on the two sliders icon. There, you can limit your query to photos, videos, news, people and more. You can also look for nearby tweets.
Let us know your favorite Twitter tricks by dropping your say in the comments below. Happy tweeting.
twitter
Share