By Andre Falana On Dec 18, 2017
Share
Join Us On Telegram
It appears that Facebook is introducing a new ad unit that
will enable businesses connect with over one billion WhatsApp users. A report
by Techcrunch
says that Facebook has launched a new “click-to-WhatsApp” messaging button for
pushing out ads from the biggest social media platform to WhatsApp so that
people can call or message via Whatsapp with the click of a button. 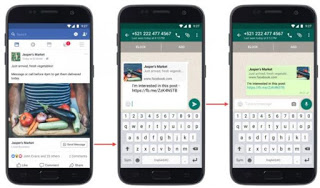 According to the report, this new feature is a bit similar
to the click-to-Messenger ads that was previously rolled out by Facebook.
However, apart from advertisers, it is not clear that whether Facebook plans to
add Click-to-Whatsapp service to regular consumers.

The same report says that over a million Facebook pages
already had included WhatsApp numbers in their posts and that many businesses
are relying on both the social media platforms more informally to connect with
customers directly.
Related Posts

“Many people
already use WhatsApp to communicate with small businesses. It’s a fast,
convenient way to stay in touch,” Pancham Gajjar, Product Marketing
Manager, Facebook, was quoted as saying.
“By adding a
click-to-WhatsApp button to Facebook ads, businesses can now make it even
easier for people to learn about their products, set up an appointment or use
their service,” he added.
It was also confirmed that this new Facebook feature is
rolling out first in North America, South America, Africa, Australia and most
of Asia.
facebook
Share

TStv returns GrandSport 1 and 2 back to its Channels List

Checkout The Best Camera Phones of 2017