While 2018â€™s phones are lying in the corner waiting for us in anticipation, letâ€™s take few seconds to peep back over our shoulder and checkout your most popular phones of 2017.

But going to that, let us see the three prominent brands in the top 20 for this year. Samsung took charge of the class with 35%, with Xiaomi in second position with 25% and followed by Nokia 15%. The rest 25% had to be shared among OnePlus, LG, Motorola, Huawei and Apple with 1 entry a piece.

Now, with reference to GSMArena data, talking about your most popular phone of 2017, then you are talking about the Nokia 6. Just like me, it was obvious that most of you picked interest in the revival of Nokia in 2017 recording about 27 million of you in fact. This was one of only two phones to break the 20 million hits barrier. As with previous years it just goes to show that itâ€™s not always the flagship phones that prove most popular. The Nokia 6 with its premium build quality, good display, mostly stock Android and a camera that pleasantly surprises with image quality only disappointed with its Snapdragon 430 SoC.

ALSO READ: Check out The Best Camera Phones Of 2017 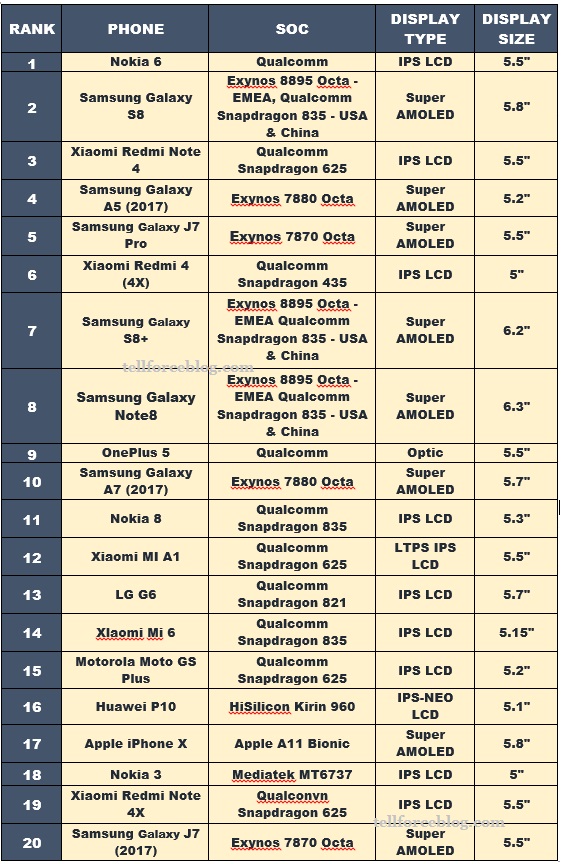 In second place was the Samsung Galaxy S8 with 23 million hits. Following its launch we commended the S8 for its size and performance, stating that it set the benchmark for flagship pocket-ability. Weâ€™ll leave it up to you to decide if the iPhone X bettered it later in the year.

Xiaomi with the Redmi Note 4 came in third with its high-quality design, blazing-fast performance, and great battery life offering a lot of bang for your buck.

You can check for all the phone specs HERE.