Just yesterday, we released some specs for BLUBOO X â€“ a clone version of iPhone X and now we are bringing another one under the shadow of the same iPhone X. Leagoo S9 is also an emulation version of iPhone X that features “under display Finger Print ID” scanner. 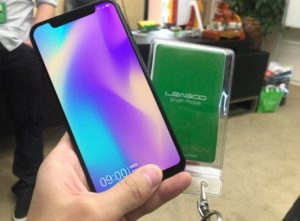 China as a whole is known for unveiling clone versions of mobile phones from top brands in the world and there is no sign of them stopping yet.

Leagoo S9 is expected to feature a curved full-vision display with 18:9 aspect ratio which is a mirror image of Samsung Galaxy S8 in that aspect. Also the S9 will come with an iPhone X-like design with minimum bezels all around and a notch on the top.

Spec-wise, Leagoo S9 will feature under display fingerprint sensor, wireless charging, 4/6/8GB of ram, Quick charge support with Face ID. All these makes it look familiar to iPhone X but the main noticeable difference is the name â€œLeagooâ€ written at the bottom of the phone.