TellForce Blog
Home Leaks/Rumours GeekBench reveals supposed BlackBerry KEYone successor
Twitter
Pinterest
Linkedin
ReddIt
WhatsApp
Tumblr
Email
Print
Telegram
Join Us On Telegram
A new device has appeared in the famous benchmarking app, GeekBench. The device in question is dubbed “QUALCOMM BBF100-1”. Recall that the BlackBerry Motion model number is BBD-100-X while that of the BlackBerry KEYone is BBB100-X, where X is a number depending on the region. 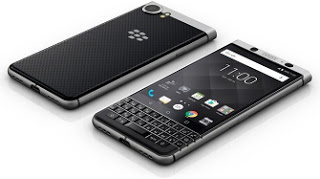 Looking at the timing of this report, it’s easy to speculate that this is going to be the successor to the BlackBerry KEYone. In 2016, a prototype of the (then called) BlackBerry Mercury was revealed to the press, who received the device very well regardless of the fact that it only got info about the device’s hardware.
Well, the BlackBerry device which we are yet to know its name commands pretty good scores with a Qualcomm Snapdragon 660 CPU paired with 6GB of RAM and that is all that was revealed by the newly uncovered GeekBench results. 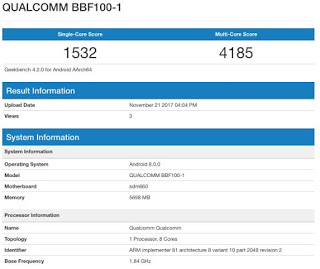 The BlackBerry KEYone can boast of good reception and performance, so we are very much anticipating to seeing how Blackberry and TCL come together for the ‘KEYtwo’.

As per our previous report, last month – this unreleased BlackBerry will feature a display resolution of 1620 x 1080 px and will most definitely have a QWERTY keyboard.
Source (Translated)
ALSO READ:  Samsung Galaxy Z Flip3 5G Appears On Geekbench, Reveals Key Specs

Samsung Galaxy S11 Will Use The 2nd-gen 108MP Sensor