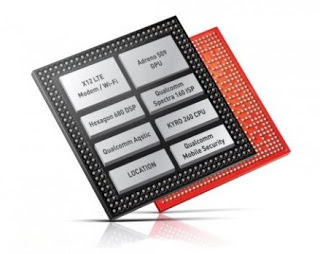 Qualcomm has introduced a new 14nm FinFET process-based Snapdragon
636 chipset. The new chipset is an upgrade from the Snapdragon 630 which comes
with Quick Charge 4 support for long displays with resolution reaching FHD+ or
2160×1080 pixels.
This announcement was made during a lecture at the 4G/5G
Summit in Hong Kong hosted by Qualcomm along with other ecosystem leaders.
The processor is Kryo 260 with eight cores, clocked up to
1.8 GHz. Its developer claims that the CPU offers up to 40% higher performance
than its direct predecessor – the Snapdragon 630’s processor. The GPU is Adreno
509, providing additional 10% performance, when compared with the Adreno 508.
Related Posts

The Snapdragon 636 has the ability to support either one 24
MP camera or dual camera setup up to 16 MP sensors with the Qualcomm Spectra
160 ISP. It also supports 1080p at 120 fps or 4K at 30 fps during Video
recording and supports 4K video playback as well.
Though we are yet to see any charger that is compatible with
the Quick Charge 4 that was announced by Qualcomm earlier this year, the
Snapdragon 636 will be compatible with such chargers.
The new chipset also has X12 LTE modem with very good download
speed up to 600 Mbps. And the two SIM cards have the ability to go on LTE with
next-gen Calling Service.
The Snapdragon 636 is expected to start rolling in to ships
from November 2017.
ProcessorsQualcommSnapDragon
Share