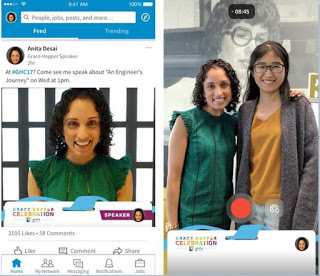 LinkedIn appears to be boarding the Snapchat-like train of apps. The company is the latest to dig in to Snapchat’s world to borrow a feature from it.

The company introduced a new video feature Tuesday that allows event attendees to add Snapchat-style filters to videos they create within the LinkedIn app.
The location-based filters are part of the service’s new in-app video creation feature, which allows LinkedIn users to record and share videos directly from the app. The filters are making their debut at the Grace Hopper Celebration conference this week, but the company says it plans to make them available to more events in the future.
The idea is similar to other location-based filters, like those on Snapchat and Instagram: Attendees at specific events where the feature is enabled will have the option of adding the illustrations to videos they create and share within the LinkedIn app.

The graphics themselves are styled to look like conference badges, with the poster’s profile photo in the right corner. The filters will also indicate if the person sharing the video is a speaker at the event.
Related Posts


The company has been testing the effects at a handful of events over the past few weeks but this week’s Grace Hopper Celebration is the first major event to feature the illustrations.

He notes that video is shared 20 times as much as any other type of content on the platform. And the company’s new video creation tool, which began rolling out in August, has been particularly popular with people attending events.

While the idea of Snapchat-style video graphics may seem out of place on LinkedIn, long known as a place for professional networking rather than first-person videos, Roybal says the platform’s reputation doesn’t mean there’s no place the type of sharing that was once confined to platforms like Snapchat.

“It doesn’t mean that people have to be boring. I think that people really like to bring their authentic selves to work, and this lets them show off what they’re doing,” says Roybal.

“It’s a way of conveying their passion, their insight, at a place like Grace Hopper.”


Right now, LinkedIn has only tested the conference badge-style filters at a handful of events. The illustrations were designed internally at LinkedIn, which, for now, is tightly controlling which events will be able to take advantage of the location-based filters.

But Roybal didn’t rule out the possibility that LinkedIn could eventually turn over more control to its users, similar to the way Snapchat has done with its geofilters.

“We’re really excited to see what people ask for next.”