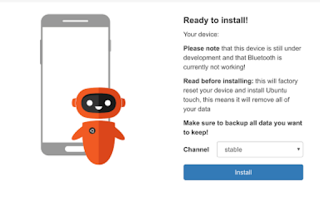 It’s been a while that we see new released smartphones running on Ubuntu. However, users of old handsets have been given the privilege to experience another feeling of new thing on their devices via a new  update called UBports Ubuntu Touch OS.

Recall that earlier this year, Canonical suddenly announced its plans to halt its support for the Ubuntu Touch, the programming source code for the project was taken up by the UBports community. Now, UBports have decided to develop their own version of the Ubuntu Touch OS.

This gives the owners of the old Ubuntu smartphones the opportunity to get a new OS version.
Before now, updating your device takes a tedious process but now, I guess UBports has finally find a way around it. So, here is the process on how to update your old Ubuntu device to the new version.

What Is Needed To Update To UBports Ubuntu Touch OS

Note that your Ubuntu phone will be wiped during this update. As such, we advice that you make a backup before starting.

Features of The New UBports Ubuntu Touch OS
Here are the new features that comes with latest version of Ubuntu Touch OS. These includes:
Leave comment with us to know how far you were able to go with the update process and your experience on the new version.
LinuxOSUbuntu
Share