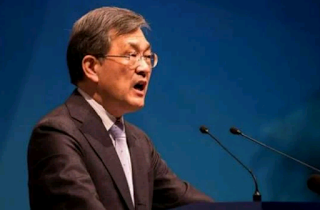 There is a new development coming from the management zone of Samsung Group. This follows the imprisonment of one of the company’s exec back in August for corruption.
Samsung Electronics chief executive Kwon Oh-hyun has decided to resign from office based on an “unprecedented crisis”.
Kwon, one of three co-chief executives at Samsung Electronics believes it’s high time a younger face steps into his shoes.
His resignation comes on the same day the firm forecasted record quarterly profits, thanks to higher memory chip prices. The Samsung Galaxy Note 8 is also looking good receiving the company’s highest number of pre-orders.
Related Posts

Mr Kwon said he had been thinking about his departure “for quite some time” and could “no longer put it off.”

“As we are confronted with unprecedented crisis inside out, I believe that time has now come for the company [to] start anew, with a new spirit and young leadership to better respond to challenges arising from the rapidly changing IT industry, “ he said in a statement.

He will remain on the board of Samsung Electronics until March 2018.

In August, the group’s heir apparent Lee Jae-yong was convicted of bribery and corruption and sentenced to five years in jail.
Mr Lee was accused of giving donations worth 41bn won ($36m; £29m) to non-profit foundations operated by Choi Soon-sil, a friend of South Korea’s former President Park Geun-hye, in return for political favours.

This development will require Samsung to earn the confidence of government and the financial markets, hence a plausible reason for Kwon resigning from the family-run business.
Samsung Electronics is regarded as the ‘’jewel in the crown’’ of the Samsung Group conglomerate, which is made up of 60 interlinked companies and is one of South Korea’s massive family-run businesses known as chaebols.
Share