Huawei says Mate 10 “is not a smartphone” 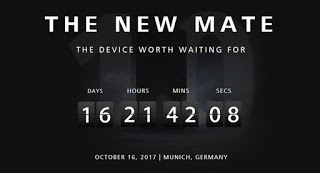 Today, Huawei released a teaser video with the drive to keep
its fans excited and eager to lay their hands on imminent Mate 10 smartphone
series.

In the video shared by the Chinese company via its official
Twitter handle- embedded below – Huawei actually maintains that the upcoming Mate
10  “is not a smartphone“, but “an intelligent machine,” because it “sees, thinks, and learns like us, for us.”

The video as well reveals a dual rear camera, and covered in
a metallic frame. Rumors says that the Mate 10 series will include three
smartphones – a Mate 10 Pro, a Mate 10 Lite, and a regular Mate 10.
As earlier reported, the Mate 10 series will come with AI
(Artificial Intelligence) built in, all thanks to Huawei’s brand new octa-core
Kirin 970 processor. Huawei claims that this would be the “world’s first mobile AI chip with a dedicated NPU (Neural
Processing Unit).”

Well, we’ll have to wait till October 16 for the anticipated
Huawei Mate 10 series, the Artificial Intelligence and their overall
performance. Stay tune!