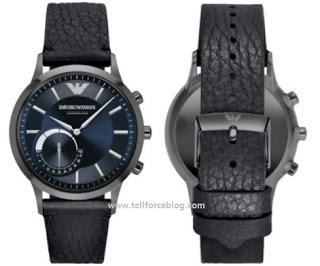 We are now seeing more companies diving into the pool of smartwatches
making every day and more will still be coming up. Lately, fashion brand Armani
first joined the smartwatch market with the Emporio Armani EA Connected Watch.
Now, the company has come back again with a touchscreen
version of the watch, which runs Android Wear 2.0. This latest smartwatch is
part of parent company Fossil’s effort to launch 300 new smartwatch options in
2017.
The new Emporio Armani EA Connected Watch was initially
launched during the Milan Fashion Week. On entrance, it is just as good as expected
from a top fashion brands in the world, with a 46mm body and exquisite design. 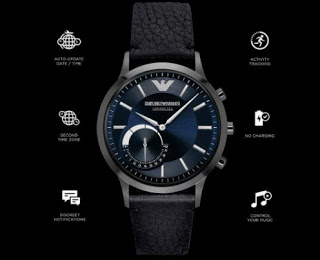 This version of the smartwatch is designed to be easier to
wear every day.The EA Connected Watch will have a selection of 8 custom Armani
watch faces. Also, Armani is offering 11 interchangeable watch bands. These are
made of fabric, leather or rubber, and they measure 22mm.EA Connected Watch
The EA Connected Watch is a typical Android Wear 2.0
smartwatch. It can be used to call on Google Assistant, check smartphone
notifications, and also send and receive text. Most of these features will be
available if you are making use of an Android smartphone, though Android Wear
is compatible with iOS devices too.
The smartwatch comes with a Qualcomm Snapdragon Wear 2100
processor, an AMOLED display, wireless charging, and an IP67 water resistance
rating. As of now, that’s all there is to know about the specifications, as
Armani has not released any detailed technical specifications yet.
Now, it has been mentioned that Armani’s parent company
Fossil is trying to launch a large number of new smartwatches this year. This
is to be done both through the fossil brand and through the company’s various
sub-brands, which include Armani, Michael Kors, Diesel, and some others. Right
now, the company has launched 100 smartwatches, and it shows no signs of
slowing down.
Not all of these smartwatches will run Android Wear, though.
Many of these devices will be hybrids, and some of them will simply be
variations of a single watch. As of now, the EA Connected Watch is available
for sale for up to $395.

Is There Any Benefits In Changing IMEI Number?