ReplyASAP: An App makes it impossible for you to ignore a message

By Andre Falana On Aug 29, 2017
Share
Join Us On Telegram
Parents around the world have always sought better ways to communicate with their children, especially teens, who have simultaneously always cleverly look for a way to ignore them. 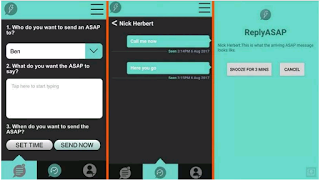 Today, a typical teenager would be with his/her phone all day, surfing all the available social media sites. But when their parent tries to reach them, their phone mysteriously becomes unavailable.
Now, there’s an app that can help parents get through to their teenagers without being ignored. The app is called ReplyASAP.
This app lets parents contact their children, even if the kids’ phones are always on silent mode. The creator of ReplyASAP, Nick Herbert, realized that the alarm on his phone would go off even when the phone was on silent. Therefore, there had to be a way for text messages to do the same thing.
Related Posts

ReplyASAP is only currently available for Android. All it does is override the silent function of your smartphone, and it can be used as the default SMS or messaging app for your phone. However, it works best as an emergency text app.
Reports state that this app has a particularly effective way to get you to reply to its texts. When you receive a message through ReplyASAP, you cannot close the screen or turn off the loud ringing noise it makes. The only way to do that is to press a button on the message takeover page. This then displays a read receipt.
Now, when you go to the takeover page, you have two options. You can either Cancel or Snooze for 3 Minutes. Both of these actions will be relayed to the sender of the message. If you delete the app, the user will also receive a notification, alerting them to the fact that you no longer have the app on your phone.
The point of this app is to stop people from ignoring text messages, or just replying sooner. It appears that ReplyASAP can actually make this happen. So, if you have someone who needs to curb the habit of ignoring texts, this is the app for you.
Source
AndroidReplyASAP
Share

Koniku Kore: A Computer Created by Nigerian That Can Smell Explosives and Cancer Cells