MTN back again in profit-making after turbulent 2016

By Andre Falana On Aug 4, 2017
Share
Join Us On Telegram
MTN Group, Africa’s biggest mobile telecom operator, says it
has moved away from a turbulent 2016 that highlighted the risks of the
company’s emerging markets strategy to a profit-making firm. 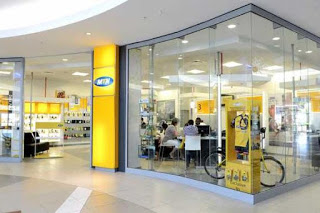 MTN said on Thursday in Johannesburg that its earnings for
first-half of the year had rebounded.
It said that its headline earnings came in at 3.9 billion
rand ($294.40 million), or 212 cents per share, in the six months to end June
compared with a loss of 4.9 billion rand, or 271 cents per share, a year
earlier.
“These numbers give us
hope for the future. It is a very encouraging platform upon which to build our
strategy,” said Rob Shuter, former Vodafone European head, who became chief
executive in March.
MTN’s shares were nearly 3 per cent higher at early trading
due to the positive results.
Related Posts

The results were bolstered by the absence of charges related
to a $1.1 billion fine imposed by Nigerian authorities last year in a
long-running dispute over unregistered SIM cards.
Founded at the end of white rule in 1994, MTN’s clashes with
regulators in the past few years had held back growth and threatened to tarnish
its image as one of post-apartheid South Africa’s biggest commercial successes.
Shuter’s appointment is expected to put the company back on
a growth path with a shift away from basic telecoms services toward the ability
of its users to pay bills or watch live football matches on their phones.
MTN has more than 200 million users in more than 20
countries in Africa and the Middle East.
MTN had said last week that the loss in the first half of
last year was mainly due to “non-recurring costs”, including the Nigerian fine.
Shuter, along with his new executive team that includes the
new head of M&amp, A Stephen van Coller, and finance head, Ralph Mupita,
may have other tricky issues to tackle in Nigeria and also Iran.

Leaked Nokia 9 specifications: Nokia 9 may be better that Galaxy S8

How To Automatically Respond To WhatsApp Without Your Phone

Elon Musk’s STARLINK approved by Nigeria, to battle with MTN, Glo, others

Elon Musk’s STARLINK approved by Nigeria, to battle with…