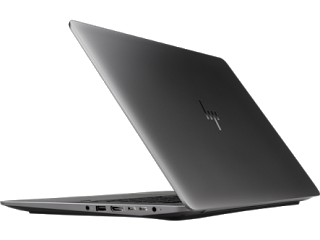 When we talk of manufacturers of premium notebooks that can be regarded as powerhouse, HP will definitely among them and if not a leader. To its their status as one of the leading laptops/PCs producer, HP has released the HP ZBook Studio G4 – a device packed with perfect and amazing specs and feature.
The HP ZBook Studio G4 features a clam-shell design based on a CNC-machined aluminum and die-cast magnesium body with diamond-cut edges. This makes it solid enough to withstand bumps and drops without any negative effect on its internals.
The gap between the screen and the base unit is not apparent at first, you can see it if you turn the laptop to a certain angle which makes feel more solid.
The screen comes with 15.6-inch display, with thick bezels on each side. Furthermore, there is a metallic trim along the sides of the base, along with the sides of the touchpad.

The HP ZBook Studio G4 has a gigabit Ethernet port, two USB 3.1 Gen1 Type -A ports, and one SD card reader on one side. On the ther side, there are to Thunderbolt 3 ports, one HDMI 1.4 port, one microphone/headphone combo jack, and one USB 3.2 Gen1 Type-A port. In addition to the Ethernet port, the laptop has a Wireless AC component with two incoming and two outgoing internal antennas, supporting speeds of up to 867Mbps. This component includes Bluetooth 4.2 connectivity.
Related Posts

Also, the laptop comes with a top-facing speaker, measuring 1.25 inches wide and 4.25 inches tall on each side of the keyboard. This means that audio playback is not muffled when the laptop is being used. The sound is quite clear, and the volume cannot be turned up to a level where the laptop chassis begins to vibrate.

But then, all these features largely depend on the processor. Therefore, the laptop’s processor has to be able to handle all the load. The HP ZBook Studio G4 comes with Intel’s Xeon E3-1535M v6 quad-core processor. According to reports, this processor has a base speed of 3.10GHz and a boost speed of 4.20MHz. this outperforms Microsoft’s Surface Pro.
However, the storage on this laptop is a bit outdated. The device comes with a Toshiba XG3 Series M.2 NVMe SSD, which was first introduced in 2015. While this could perform the standard hard drive and SATA-based 2.5-inch solid state drives, the laptop could do so much more with a newer SSD.
The laptop comes with Nvidia’s Quadro M1200 graphics chip. This comes with 4GB of dedicated GDDR5 memory, meant to run applications like AutoCAD, 3DS Max etc. all this runs on a92 watt-hour Li-ion polymer HP Fast Charge battery, which lasts nine hours and 15 minutes on average.

All in all, the HP ZBook Studio G4 is a great laptop. Its biggest competition is the Dell Precision 5520, which is a fantastic laptop too. But the ZBook manages to be a powerful yet thin and light workstation, with huge processing potential. However, you would have to fork over a whopping $3,510 to own one.
Source
HP
Share