Facebook profile pictures are an essential way that aid people in finding one another on the platform. Though, a lot of people hate uploading their genuine photo on the site. For instance, in India an increasing number of women feels uncomfortable in posting their pictures on Facebook due to fears of photo theft. 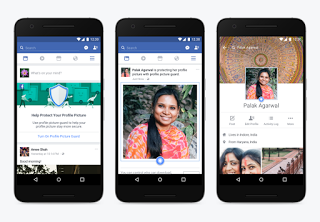 To counter this criminal act, Facebook has however taken measures
to push away these worries. Recently, Facebook announced a latest feature that
allows its handlers in India to make their profile pictures more secure than
ever. This new feature is called Profile Guard.

As promised by Facebook, this new feature would be expanded
to other countries soon.
These tools, developed in partnership with Indian safety
organizations like Centre for Social Research, Learning Links Foundation,
Breakthrough and Youth Ki Awaaz, are designed to give people more control over
their experience and help keep them safe online.
The New Controls

People in India will start seeing a step-by-step guide to
add an optional profile picture guard. When you add this guard:
Related Posts

New Controls
People in India will start seeing a step-by-step guide to
add an optional profile picture guard. When you add this guard:
Based on preliminary tests, Facebook found out that when someone
adds an extra design layer to their profile picture, other people are at least
75% less likely to copy that picture.
Based on this discovery, the company partnered with Jessica Singh, an illustrator who took
inspiration from traditional Indian textile designs such as bandhani and
kantha, to create designs for people to add to their profile picture.
If someone suspects that a picture marked with one of these
designs is being misused, they can report it to Facebook and the
design will be used determine whether it should be removed from our community.

How To Make Blogger Widget To Show On Mobile View

XBox One X Specification and Price. 2017 advanced version of One S