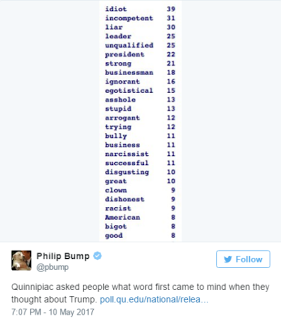 A new poll conducted by Quinnipiac University, alleged that some of the first words that comes to many people’s mind when they think about President Donal Trump are idiot, incompetent leader and liar.

The new survey which cut across the whole United States, featuring 1,078 voters revealed that words like idiot; incompetent; liar; leader; unqualified; president; strong; businessman; ignorant; egotistical; and asshole are some of those most commonly associated with the president.

The top three words which are idiot, incompetent, and liar featured 39, 31, and 30 times, respectively.

Then the least commonly words used includes: Aggressive, decisive, embarrassment, evil, patriotism, negotiator and some others.

Video: This is why Nigeria cannot progress – says Ben Bruce