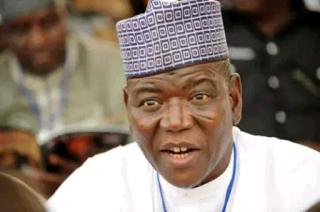 Following the arrest of the former Jigawa State Governor, Sule Lamido, on Sunday, April 30, the Nigerian Police Force (NPF) has clarified and given reason for his arrest and detention.
According to the NPF, Kano State command’s spokesperson, Samba Sokoto, the former Jigawa State governor made some inciting statements at a Peoples Democratic Party (PDP) meeting in Dutse,the state capital.
Lamido’s alleged offence is contrary to Section 114 of the penal code and the authority swore to charge him to court after full investigation.
Premium Times reported that Sokoto said the investigation was triggered by a submission by the Jigawa State government on April 27, 2017 against the ex-Governor, who was accused of encouraging his supporters to embark on violence if the July 1 local government elections did not favour them.
The petition originally written in Hausa, the Lamido allegedly urged the party’ supporters to “break heads”

Lamido reportedly said: “Before the election I will make every one of you swear with his life to protect our cause. No matter what, I will not listen to you for complaining.

“All I want is to come for your bail in the police station breaking another person’s head or you fought someone because the administration belongs to mad people.”

Lamido was arrested at his Sharada Kano residence earlier on Sunday, April 30 and moved to the Zone One Command of the Nigeria Police in Kano.
However, when the former governor’s house was searched by the authority, a source in the force disclosed that nothing incriminating was found in his home.
Lamido spent the night in detention and may be held till Tuesday, when he can be charged to court for hearing.
The political aide to the fprmer governor, Dahiru Kera, however said that the Lamido is being victimised by those in power.
Realls that Lamido recently accused President Muhammadu Buhari of not really fighting corruption because he himself is corrupt.

Lamido addressed BBC Hausa Service that Buhari “equally corrupt when he served under the late Head of State Sani Abacha” and his present anti-corruption war is just noise”.

Lamido alleged that Buhari, who served as chairman of the defunct Petroleum Trust Fund (PTF) which was established by Late General Sani Abacha in 1994 to provide important facilities across Nigeria, personally spent from the national treasury as well.
ArrestcorruptionNewsNPFpoliceSule Lamido
Share