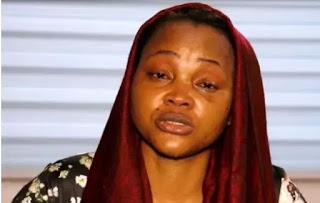 The embattled Nollywood Actress, Mercy Aigbe who is presently in a legal battle with her entranged husband, Lanre Gentry over domestic violence has claimed that she wish to build a home with Lanry, further said all they need is help.

Gentry was on Tuesday sent to Kirikiri prison over allegations of domestic violence by the actress.

However, the actress in an interview with Broadway Africa disclosed that she came out in public because she needed to seek help for her husband, adding that she does not have the plan to dump him.

According to her, she had stayed to endure all the beating because she did not want to disappoint people that see her as a role model and also for her children.

“My husband was in detention for over seven months and I never left him or go anywhere. Why would I want to go now? He says all this is make-up. He is not showing any form of remorse and still sponsoring lies against me.

“It’s not like I wanted to walk away but I just feel like we need help. I spoke to my husband’s brother about it. I told him I was going to pack out for some time while my husband seeks therapy.

“I just wanted to feel safe, that is why I moved my things out. This last beating was brutal. I actually thought I was going to die. I’m still coughing and sneezing blood even after three weeks.

“I stayed because of my children and because a lot of people look up to me. I was a role model of some sort and I really wanted to keep it together. I just wanted a home,” she said.

When asked how long the beating had continued, she said for as far back as 2013.

“I never for once came out to say that my husband did not beat me. The video people were referring to happened in 2013 when there were rumours of such and I did a video recording alongside my husband to debunk the claim.

“He beats me consistently. I stayed because I loved him and because every time he beats me, he begs and gets family and friends to beg me.

“He promised regularly to change but he never did. When my husband gets angry, he gets physical, not only to me but to anyone.

“He has done that with my house help who reported him to the Police years ago. ”

Mercy had accused her husband of physically assaulting her on Sunday, April 16, 2017.